How does ADHD affect school-age children?

But that is just the tip of the iceberg – there are many other hidden problems!

The (not so) hidden problems of ADHD

Developmental: young children are typically more active. For a diagnosis of ADHD, the degree of inattention and hyperactivity/impulsivity should be more than expected for the child’s age.

Duration: Transient behaviours come and go depending on changes in social circumstances. For a diagnosis of ADHD, the symptoms ought to have persisted for six months or more.

Other explanation: Consider other reasons for similar behaviour:

Some medical/mental health conditions that can cause similar behaviour:

What if the child is only hyperactive at school or home? 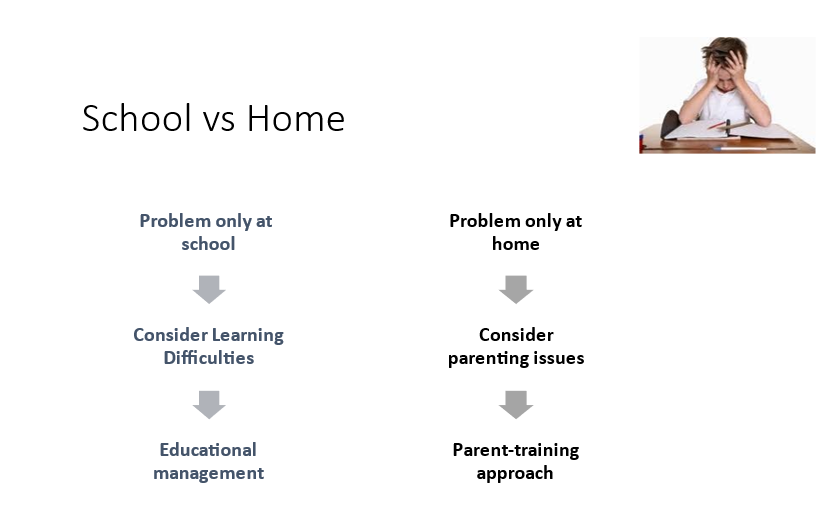 Are similar behavioural features seen in other conditions?

Yes, other difficulties, as shown in the image below, also show some of the features of ADHD. 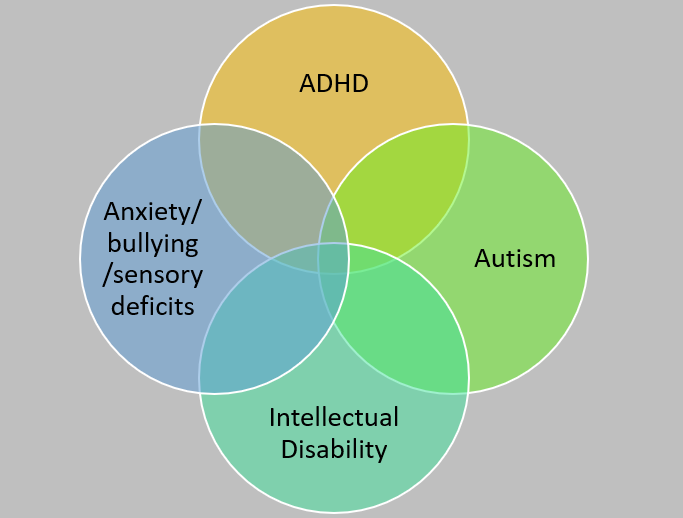 Children with autism have a poor sense of social situations and appropriate social behaviour, and their behaviour may sometimes look like ADHD. Conversely, children with ADHD are often impulsive and disinhibited and may have poor social behaviour. These two conditions also share some other behaviours, as shown in the table below. However, turn-taking and imaginative play are often (not always) intact in ADHD and often (not always) lacking in ASD. 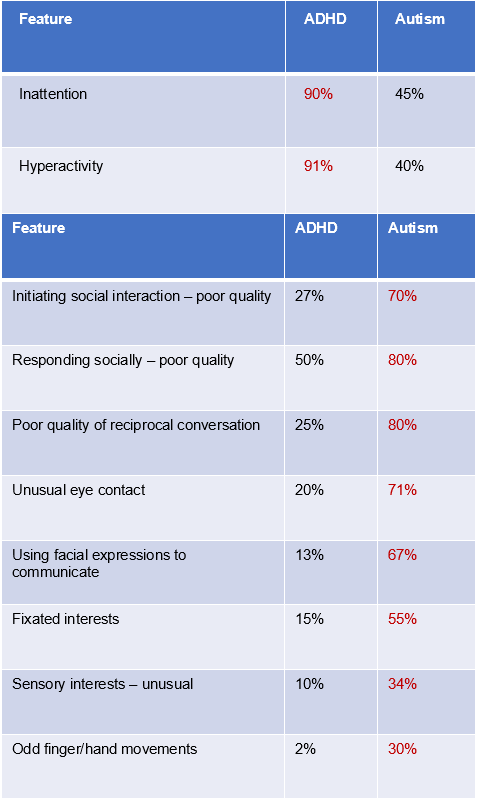 What can happen if a child with ADHD is not supported?

The outcomes of children with ADHD depend on:

In general, children with ADHD are vulnerable to:

Generally speaking, children with ADHD are seen as ‘trouble’ and are not liked by teachers and carers. They are often told off and punished, reprimanded and excluded, or simply ignored. So it is no wonder that many of them become increasingly defiant and hostile. And with time, they just give up; they simply want to be out of that environment and start truanting and missing school.

There is good evidence to suggest that children are affected by the way we look at them. And it is no wonder because our behaviour, approach, and the way we work with children are affected by how we look at them. So, it makes sense that we reflect on our attitude and develop a sense of understanding and a way of looking at the positive aspects of the child.

We have to see the child as someone who is struggling in coping with the difficulties they have and that they may not understand what they’re dealing with. It affects their perception – how they see things, how they respond, and how they behave.

Our compassion towards the child will be evident in our looks and voice, which is the beginning of the change.

We can also see the child as having some strengths; we can see the child’s distractedness as a high level of awareness, restlessness as a sign of energy and liveliness, the going off-topic as their individuality, the interruptions as their enthusiasm, and being self-absorbed as their thoughtfulness. It may not always be easy, but an attempt to look at the child positively creates chances to reward the child and build on the child’s strength rather than continually pointing to their deficits and undermining their sense of self-confidence.

Seating in the classroom

Students with ADHD tend to get overstimulated when working in group situations. Try the following:

It takes a student with ADHD about three times as long to do the same assignment in the home environment compared to the school setting. It can be the final straw for many children with ADHD that puts them off school and takes them in the direction of truanting or refusing to go to school. Consider the following to help the child cope:

Children with ADHD have more than their fair share of explosive outbursts. They make mistakes, don’t finish what they set out to do, others don’t look very kindly at them, and the frustration builds up. Sometimes, only a minor reason is enough to light the fuse.

First of all, one has to stay calm and show that you’re not wobbled and still in charge. That feeling of calmness has an impact, and it helps the child know that someone else is in control of the situation. Your mood shows on your face and in your body, so be mindful of your expressions, voice, and body language and remain non-aggressive. Try to look at and analyse your mood, and don’t take it personally.

Try not to talk too much – the child is probably not listening to you. And there is absolutely no point in trying to teach any good behaviour or reprimanding the child, hoping that that might have some effect – no, this is not the moment to teach anything.

Have a plan because this, as you know, was going to happen. Also, have an ‘escape route’ for the child and a safe calming zone. The idea of giving them space is to have a less stimulating place. You can use it as an escape route for them when they have an outburst, but you can also use it in a structured way or in a planned way rather than as a punishment or reward. Giving it a familiar name might help – it might be a ‘thinking space.

Once the storm is over, then that is the time to start working on some preventative strategies. Be on the lookout for good behaviour, and praise the child in their earshot as soon as that happens. Yes, there will be moments when you will have to say that what they’re doing or what they did was not right but try to have a ratio of four praise to one criticism; remember this 4:1 ratio.

Set boundaries and have reminders and prompts. Be assertive with the child without being aggressive. Never be sarcastic. Suggest ways of doing things right rather than asking why they did it wrong. And have your rewards ready. Praise is the best reward, but a token reward system can work wonders for children older than five years. Use a visual structure for tokens. Always only give the reward as promised, and when the child achieves something, never do it beforehand because that will be bribing, and it will backfire like anything!

Finally, remember, do everything in the context of a positive affectionate relationship. Changing behaviour is about changing your mood and theirs. And it works.

Children with ADHD are not much liked, even by their peers. They are impulsive, interrupt and intrude, have a poor sense of personal space, and are accident-prone, which puts off many of their peers. All that makes them an easy target for teasing and bullying. Some of them are also rather too sensitive to being teased by others. None of this helps either in group activities or in forming friendships.

The following strategies help overcome the barriers in their socialising:

Parents need to know the experience of the school, the understanding that the school has gathered, and the way forward. Talking to parents needs to be done in a strength-based way and almost continuously pointing to the child’s best interest. Parents often become defensive when their school points to the defects are deficits in the child, and places the responsibility of sorting it out on them. Any plan for support needs to be a shared one between this school and parents. Keep the parents posted, not just about the wrong things, not just about the difficulties but about achievements, no matter how small, and praise the parents for doing their part; they are the ones who will make a difference.

There are medicines available to treat ADHD. They should only be given to children with severe ADHD when other support measures at home and school have been tried. Rushing to medicate the child can be a big mistake because the medicines do not make much of a difference in about half of the children. So it is back down to the school and parents again. Also, there are side effects to medicines, and some of the side effects can be serious. So it is not something that should be started without proper consideration of the whole situation and the consultation with a paediatrician who is empathetic towards children. I’m afraid there is a trend in medicalising the attention needs of children, and some of the medicines currently being used are outright dangerous, and the way they are being used is outright callous. So, please, do not see it as a quick or an easy option. A lot can be done to help the child if the school and parents work together; if they hold their nerves and support each other, then there is a way forward. 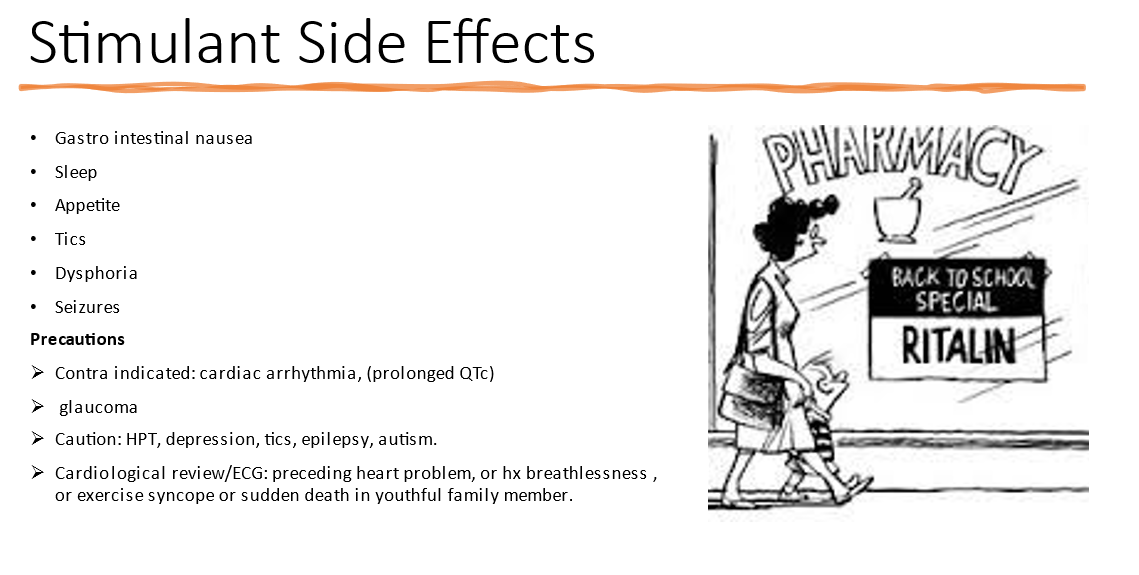